Reopening of the Chapel of the Holy Shroud 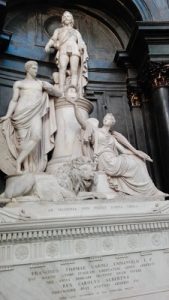 Closed for Nearly 3 decades, the Baroque Chapel of the Holy Shroud has just reopened in Turin.

It survived an  infamous fire in 1997, the origin of which remains a mystery. It burned especially fiercely because the chapel, which had just been restored, was still full of wooden scaffolding.
A dinner for the then secretary-general of the United Nations, Kofi Annan, was being held next door in the Royal Palace, while brave firemen struggled to break into the bulletproof case containing the sacred linnen, which was rescued undamaged.
The Shroud was not just a relic for the Savoy family, it was their most important treasure, far more precious than any crown or jewel, since it was sort of a divine legitimation of their power. 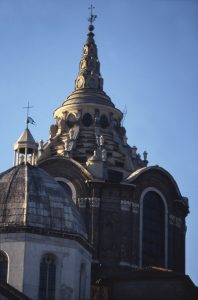 Cathedral of Turin
and Chapel of Shroud

The chapel, designed by the baroque architect Guarino Guarini (1624 – 1683) to display and store it, sits between the Royal Palace and the Cathedral of Turin.
He designed a double access to the chapel: for the king and the court on the same floor of their apartment, whereas the bishop and the clergy  could enter it through a double flight of stairs in black marble on both sides of the main altar of the cathedral.

The chapel will enrich the already extraordinary tour of the Royal Museums of Turin, a fascinating journey through the history of the Savoy dynasty, featuring the royal apartments, the Royal Library, the Royal Armoury, an  outstanding painting gallery (Galleria Sabauda) and the Archaeological Museum.