The cycle paths of Turin 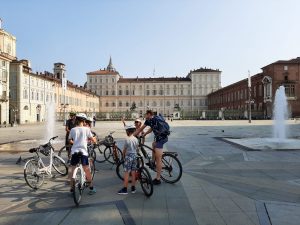 Thank to the cycle paths of Turin, over the last years I have almost abandoned the use of my car and of the means of public transport in the historic center.

Unfortunately, despite the great Italian cycling traditions, the employment of bikes on a daily basis is not yet widespread in our country, except in Emilia Romagna.

I believe that the bike conveys an extraordinary sense of freedom – without the drawbacks of public transport and the inconveniences of the car: ie. parking problems, expenses and pollution. 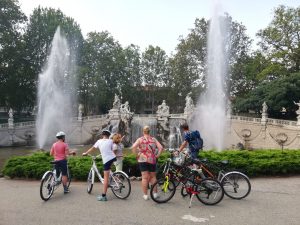 Some years ago, I successfully started organizing bike tours, taking advantage to the fullest of the cycle paths of Turin.

Indeed, a bike tour allows visitors to get an overview of the city wider than on foot and to have a first insight into a less known and unsung Italian city. All the visitors – without exception- are surprised by the wealth of vegetation in Turin: hundreds of majestic plane trees, horse chestnuts and linden line the broad and regular streets in the capital of Piedmont.

Turin is located at the beginning of the Po valley (Pianura Padana for those who are interested in the Italian language), at around 200 m. above sea level. Near the city center, the Po river has a remarkable tributary, the Dora Riparia, that flows across the Susa valley before joining the longest river of Italy. 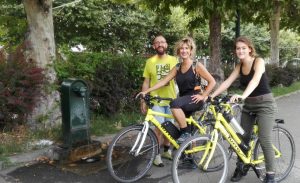 Two important rivers and the mountains nearby ensure abundance of water in the city. In the summer time, everybody appreciates the water and the beautiful fountains. The most imposing one is called the “Twelve Months Fountain”, situated in the Valentino Park.

Dozens of public fountains are scattered on squares, along the streets and obviously in the parks of the city. They are painted in green and have a distinctive shape. In fact drinking water comes out through the mouth of a bull, the symbol of Turin.

Due to the current health measures, a bike tour along the cycle paths of Turin is the ideal choice to safely discover a gem off the beaten track.

Book your bike tour in Turin

Interested in bike tours in other Italian cities? Here you can find out more…